Around the clock sustainability 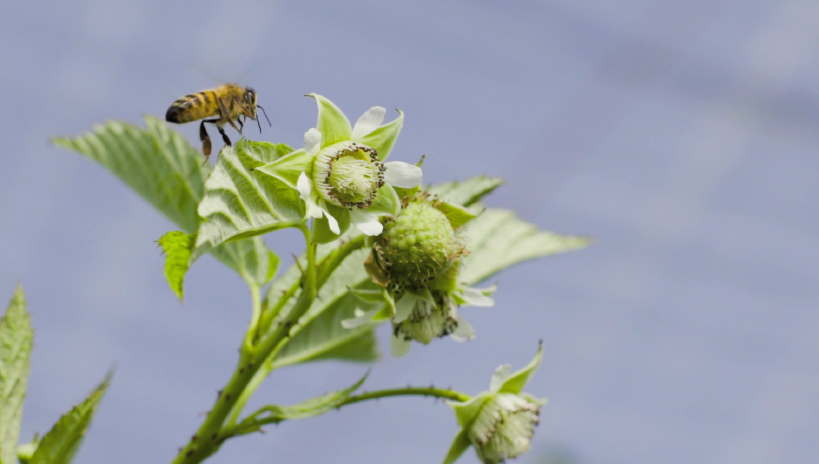 Soft-fruit producer and environmental dynamo Oli Pascall tells Fred Searle why his business, Clock House Farm, is leaving no stone unturned in its holistic approach to protecting the planet.

Sustainability has undoubtedly become a buzzword in the global fresh produce trade – and that is a good sign, showing that producers recognise the importance of environmental protections if they hope to stay relevant with customers and consumers.

There is a sense, however, that some use the term too loosely, without enough concrete actions and data to back up their lofty rhetoric. This certainly isn’t an accusation that can be levelled at Clock House Farm, one of the largest and most ambitious soft-fruit growers in the Berry Gardens cooperative.

The producer – whose farms across Kent grow strawberries, raspberries and blackberries, as well as lower volumes of apples and plums – has been focused on boosting biodiversity for a number of years now. It is only more recently that it has stepped up efforts to bring down its carbon emissions and carefully manage its water usage as well. And these three elements – biodiversity, carbon reduction and water management – are the core pillars of the company’s environmental strategy.

In each area the producer is taking an extensive list of measures to up its game and quantify progress. Carbon reduction is all about achieving net-zero emissions across the business – an ambition that managing director Oli Pascall insists is “very attainable” before the government target of 2050. Clock House Farm has undertaken its first baseline study for carbon output across the business and is focusing on setting what Pascall calls “well managed, attainable targets” for total annual carbon reduction, as well as a reduction in emissions per kilo of fruit produced.

With this goal in mind, the grower has started construction of a state-of-the-art 10-hectare greenhouse that is set to begin production of raspberries and blackberries in 2022, and strawberries by 2023. The new production facility will be heated by possibly the biggest river-source heat pump built in the UK to date, as well as featuring thermal screens for shading the crop from sunburn and optimising energy efficiency. The greenhouse, which will help Berry Gardens replace strawberry imports with domestically produced fruit, is expected to save around 3,800 tonnes of CO2 emissions a year compared to a gas-heated greenhouse.

Other easy wins in carbon reduction include a planned switch to a green energy provider, and further down the line the company will explore opportunities in carbon offsetting by planting new woodland areas – although Pascall warns of the need to be “very realistic” about the environmental benefits of offsetting.

“At times I think the real value of carbon capture from new woodland is exaggerated – it very much depends on how it is managed,” he says. “It’s very easy to make bold claims that you will never deliver on, but for us it’s about making achievable goals rather than headline statements. That said, any new woodland planting greatly complements our biodiversity goals.”

When it comes to enhancing biodiversity, Clock House Farm has taken on the principle of ‘spared and shared’ areas, Pascall explains. ‘Sparing’ biodiversity involves replanting woodland, widening hedgerows and making space for large areas of a nature reserve, while ‘sharing’ is about managing cropping areas to have either the least impact possible or an actively beneficial effect on the environment.

To this effect, the business has been investing in robotics to reduce the use of synthetic pesticides; using IPM methods such as insect exclusion netting to reduce the use of spray applications; planting 1-2km of hedges around its fields every year; mowing less to preserve habitats; and planting wildflower margins around fruiting areas to increase the number of wild pollinators in crops. Pascall stresses the importance of ensuring that the bees the producer introduces to its orchards don’t out-compete any wild pollinator activity.

In water management the Clock House MD is wary of the difficulties faced by fruit producers in the South East due to the huge population pressures on water resources.

“Our approach is to make sure that in periods of low flow in the rivers we extract from, we don’t need to extract for that low-flow period,” he says. To achieve this, the company has set out to build one reservoir a year for the next five years, and it has already constructed the first of these, with permission for the second.

Forward-thinking investments are also being made in irrigation, with a view to saving water and boosting yields. Clock House Farm has used computer-controlled radiation sum systems for over a decade now but going forward, it is investing in in-field moisture sensors across all its fields. These trigger irrigation precisely when and where it is needed by the plants, thereby reducing inputs of water and nutrients, and helping to increase output per cubic metre of water.

Pascall emphasises that there is no one solution to the environmental challenges we face. “You can focus on one area too much and have a detrimental effect on another, so thinking holistically is the best approach,” he says. “As farmers we are in a position of great responsibility but also one where we can make a big difference. We have to deliver improvements as well as communicating this with our customers. Sustainability is not a choice; it is a must.”

Robotics is another major focus for Clock House Farm, and the producer’s involvement in the much-vaunted Robot Highways project promises sustainability benefits by reducing environmental impacts as well as addressing labour shortages. Funded by Innovate UK to the tune of £2.5 million, the initiative is the largest-known demonstration of robotics and autonomous technologies in the world – a major experiment in so-called ‘fleet robotics’ whereby a number of robots operate side by side on the same farm.

Solar-powered robots designed and manufactured by Norwegian firm Saga Robotics are being used to pick, weed and mow, among other tasks on the farm, thereby reducing tractor movements. Pascall says he is especially excited about some of the technologies the robots are using to substantially reduce fungicide use.

The project is forecast to reduce fruit waste by 20 per cent and fungicide use by 90 per cent, as well as enabling a major decrease in the use of fossil fuels across on-farm logistical operations.

Our story
Our team

Our story
Our team